“SCF” was the son of a builder who built much of the housing in the centre of Colwyn Bay, St. John’s Methodist Church and the west side of Station Road. Tragically, his father went bankrupt and died early, leaving his son aged 16 as the sole bread winner of a large family. He worked as a joiner, a jobbing builder and then gained a scholarship to the study architecture under Professor Sir Charles Reilly, Head of the Liverpool School of Architecture. After war service in the RNAS. he returned to Colwyn Bay (despite advice from the architects in London to stay in the capital).

In the 1920s he designed the war memorial obelisk in Llandudno, the Arcadia Cinema in Princess Drive followed by, a real break through in his career, the Hospital in Hesketh Road incorporating innovative ideas from America. A long connection with Rydal School followed with the Costain Building and after the second world war in 1957 their Memorial Hall. In the 1930s he was awarded the Honorary Degree of Master of Architecture by Liverpool University. He was responsible for Woods in Station Road, St. John’s Church House in Old Colwyn (1935-7) and several delightful houses such as the “Wren’s Nest” in Lansdowne Road and his own home “Moryn” on the Cayley Promenade. During the same period he was designing modern cinemas in Rhyl, Birkenhead, Flint and in Conwy where a large modern building was related with great sensitivity to the surroundings of the historic town.

After the 2nd World War, his practice spread further with large housing schemes in Llanrwst and Beaumaris with terraced housing adapted cleverly to sloping sites. During a visit by the then Minister of Housing, he managed to persuade Aneurin Bevan that ceilings should be lower contrary to regulations (which he had ignored!) saving materials, manhours and heating costs. The Elwy Road estate in Rhos followed, to win a Civic Trust Awards with visits and praise from Clough Williams Ellis and remarkably the great American architect Frank Lloyd Wright. In this period he received the OBE. and became a Freeman of the Borough. He was a founder member of the Historic Buildings Council for Wales and was active in the Council for Protection of Rural Wales.

On a wider scene he was appointed at the instigation of Professor Sir Patrick Abercrombie to act as Landscape Consultant to the Central Electricity Generating Board who were developing large scale hydro-electric schemes in the Snowdonia National Park and at Clywedog and Rheidol. What might have been large scale visual disasters were sensitively integrated into the landscape. He was engaged in similar work in Milford Haven which was starting to be used by super tankers needing massive tanks on shore for victualling. In 1863 a large fort surrounded by high walls had been built to guard the harbour. He was able to persuade BP to site their tanks within it and the American company Esso to site theirs below a critical skyline thus greatly reducing the impact on the dramatic landscape of the Haven. He was also the landscape consultant in the Lake District for major engineering work related to Ullswater and Windermere.

Article by John Howard – With acknowledgement to Ralph Colwyn Foulkes for his help and advice. 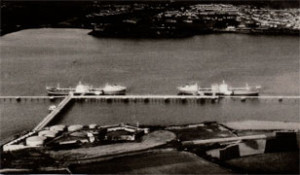