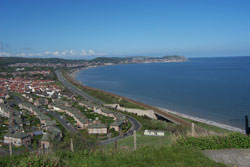 Colwyn Bay stands on a wide sweeping bay on the North Wales coast and is located among some of the most attractive scenery in Wales. The town is set in a bowl shaped depression with tree clad fringes sloping down to the coast.

Origin of the town

The town is Victorian and dates back to 1860. At that time sea side resorts were held to be desirable places to live and visit conferring health benefits to visitors and residents alike. The popularity and demand for such resorts led to the idea of a new purpose built resort and this came about through sale of 3000 acres of development land by the Erskine and Pwllycrochan estates. The Holyhead to London railway which passes along the coast was a vital part of the initiative in that it provided a vital transport link to the big centres of population in North West. Work on the new town started some time after the land sale and as it grew it attracted many wealthy migrants apparent today in the legacy of grand Victorian and Edwardian houses. Some of these were the second homes of wealthy northern industrialists. One of the first buildings in the new town was the Colwyn Bay Hotel it’s construction demonstrating the confidence in the new town. Sadly this landmark building was demolished in the 1970s. Steady expansion of the town continued into the twentieth century with the construction of many fine houses reflecting a diversity of architectural styles.

By 1887 the town was of such importance to be considered a local government area in its own right and seceded from the area and control of Conwy Rural District Council by becoming an urban district in 1894. After subsequent reorganisations in 1934, 1974 and 1996 the town now falls within the Conwy County Borough Council’s administrative area.  A second tier of local government continues in the form of Colwyn Bay Town Council.

As the town grew in size and prosperity it became a regional shopping centre with a range of shops reflecting it’s affluence. It also continued to grow as a traditional sea side holiday resort offering a variety of attractions including the dramatically located Welsh Mountain Zoo noted for it’s conservation work. Another important attraction is Eirias Park situated to the east of the town centre comprising 40 acres of rolling open park land and formal gardens close to the sea front and offers a leisure centre and other recreational amenities.

The original settlement of Old Colwyn was a small fishing and farming community that grew up around the river Colwyn. This inconsequential looking stream provided a focus for the community which is much older than the town of Colwyn Bay. It is possible to walk from the promenade for about a mile following the North Wales Coastal path through the village, the Fairy Glen and its ancient woodland.

A prosperous sea side village lying on the western side of Colwyn Bay and has a small harbour providing moorings for small boats. There is a broad sweeping promenade part of which is backed by a grassy embankment known as Caley Promenade. The name celebrates Sir George Caley (1773-1857) a Yorkshire man who owned land and had family connections with Rhos-on-Sea. He is acknowledged as the formulator of aeronautical principals long before powered flight became a reality and is honoured as such by the aeronautical industry including NASA. At one time Rhos on sea had its own pier now only the entrance remains after the structure was destroyed by fire. The present village grew as part of Colwyn Bay on the site of an ancient fishing community which included a Cistercian Monastery who’s monks constructed and worked the Rhos Fynnach fishing weir.

Rydal School – This noted public school was established in 1885 and has a number of famous personalities who were past pupils. The school contains stained glass windows of particular merit which originated from the 1925 built Penrhos Chapel. Some of the buildings were designed by Sidney Colwyn Foulks the noted architect.

Penrhos Girls School – This school was founded in 1880 and also has a number of distinguished ex pupils. During the Second World War the buildings were requisitioned by the Ministry of Food who were evacuated to Colwyn Bay from London. In consequence the school was moved to Chatsworth House in Derbyshire for the duration of the war. The playing fields have now been built on to provide housing. Since completion of the development a commemorative plaque recording the history of the school has been installed on the site and Colwyn Bay Civic Society was pleased to support the initiative. Both Rydal and Penrhos have been amalgamated and continue in a joint role.

The Wireless College – The college was established in 1925 and continued until 1970. The college trained Marconi radio operators and many of these brave men lost their lives in the Merchant Navy during the Second World War. Past pupils of the college still hold regular reunions some of whom travel across the world to attend. A commemorative plaque has recently been unveiled marking the site of the College. Colwyn Bay Civic Society gave it’s support to the plaque scheme.

The town retains much of it’s original lay out except that the central area was redeveloped when the A55 expressway was built in 1984. It retains a rich diversity of architectural styles in many of the large houses. Many of the larger Victorian and Edwardian houses in central Colwyn Bay have been converted to flats some being sensitive conversions that preserve the original character. The decline of the town as a sea side resort has brought new challenges and is the subject of a regeneration initiative. There are proposals to redevelop the promenade which has great possibilities to develop one of Colwyns great assets, it’s sea front. Most of the regeneration proposals are for the central town but the outlying residential areas remain among the most desirable in Wales.